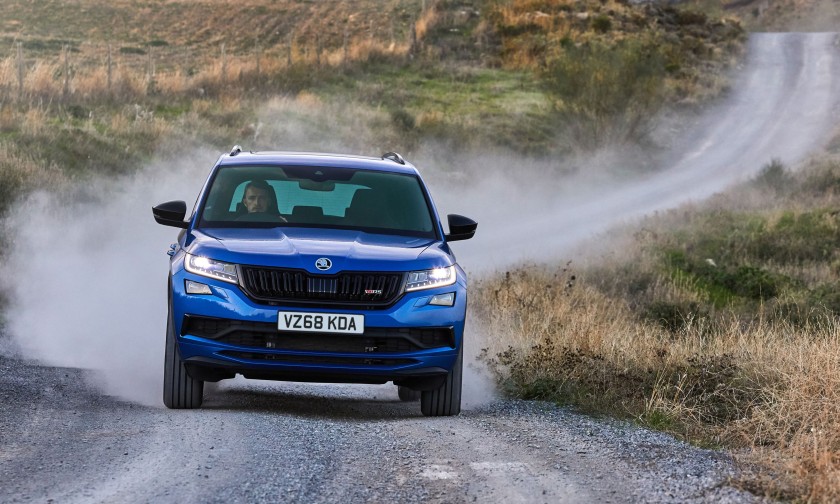 THERE was a time, (sorry again Skoda), when if you mentioned a £43k-plus Skoda, you would have laughed out of the pub, club, cafe, wherever.
We all know what has happened since then with the VW backed Czech car maker.
Producing cars to rival its parent company, it was only a matter of time before that particular barrier was hurdled.
The large SUV Kodiaq takes that laurel with its high(ish) performance vRS version, which features a twin-turbocharged, two litre, 237bhp engine. It rockets all two tonnes to 60mph in just seven seconds, not jaw dropping, but quick enough and yes, costs more than £43k.
The slight surprise is the vRS is a diesel, a diesel with bags of pace and power with oodles of torque, so power is on hand at all times. In addition it features Dynamic Sound Boost a system that modulates the sound of the car. to deliver a throaty roar when the pedal goes to the metal.
How many would plump for this over a more basic model at around half the price, won’t be very many, I would guess. But there’s no doubt it’s a bit special.
For that price tag you get quite a package including switchable all-wheel drive with seven speed DSG gearbox, cutting edge technology and not forgetting Skoda’s ingenious little extras, like the umbrellas hidden in the front door, retractable door guards and an ice scraper in the fuel flap and even a little bin in the door.
An excellent car already, the beefed up vRS is also a five or seven seat offroader that looks pretty sensational.
The day of the ugly duckling polluting 4×4 is long gone and the Kodiaq features sleek, sharp, for the type of car, styling, attractive light clusters with LED technology, eye-catching bumper set up, sporty grille with wing mirrors and roof rails in gloss black. The huge 20inch alloy wheels are the largest ever on a Skoda.

The sporting theme continues inside the car with Alcantara sports seats and black, diamond-cross stitching on the doors and red stitching to the flat -bottomed steering wheel and seats. There are chrome inserts and the vRS logo prominent both inside and out.
The centrepiece is the nine inch central control screen which controls navigation infotainment and connectivity, which includes smartphone connectivity.
Standard on this model is the large virtual cockpit in the binnacle which is driver programmable for various views, from sat nav, to car settings or infotainment.
On the road, Skoda claims an average fuel consumption of around 35mpg with CO2 emissions of 167g/km, pretty much confirmed by the onboard computer. Still pretty good for such a heavy beast.
Switchable all wheel drive is standard via a seven-speed DSG gearbox. There’s also adaptive, dynamic chassis control and various drive modes, depending on your mood.
Also standard are electronically adjusted shock absorbers and nicely weighted, progressive steering is also included as standard. This makes the handling as sharp as a tack for such a big car with virtually no evidence I could find of body roll.
Whether a five or seven seater in this case, practicality is excellent with 720 litres, expanding to 2,065 litres with all the seats folded, ideal for a large family, while the roof rails offer further carrying capacity. In addition there are other cubby holes, cup holders and bins through.
Securing nets in the boot are also a boon.
Happy at high speeds on the motorway, where the 500Nm of torque gives instant power, it is equally comfortable pottering around town. The only slight downside is the low profile tyres make it hard for the suspension to soak up the bumps on lesser roads.
Packed with standard equipment and jam packed with safety kit, it is a fine package, a worthy flagship for Skoda, which is throwing out a challenge to the best.